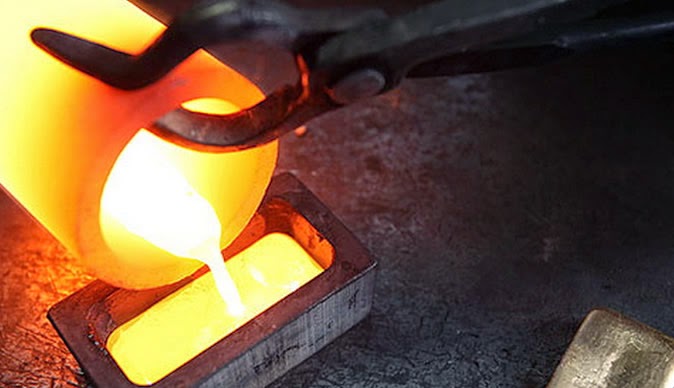 The book of Habakkuk is essentially a glimpse of how faith progresses in a person's life. Habakkuk is like God's own show and tell for us and there is much to learn about how God refines faith, for those willing to watch and listen. He moves from wrestling with God in the valley of complaint, to waiting on the wall like a watchman for God's answer, to writing down God's curious answer and running with it. He ends up worshipping God on the mountain, a man convinced of God's goodness and power even though nothing in his circumstances has changed. God has transformed Habakkuk to be able to rise above his circumstances. Although our faith journeys may not progress in exactly the same manner, it's a very helpful glimpse into God's process of refining faith.

Peter, the disciple who denied Jesus three times, wrote in his first epistle that we are to count it all joy when our faith is tested by trials, because the testing of our faith will bring glory to God, which is more precious than gold. When Jesus restored Peter around the fish barbecue, he said, "Peter, satan has asked that he may sift you like wheat but I have prayed for you that your faith may not fail you." Jesus, the author of our faith is committed to refining and finishing our faith, which is more precious than gold.

One of the aspects of Habakkuk's faith that impresses me, is that he submits to God's Sovereignty in sending the Babylonians to capture Israel, but doesn't allow this news to cause him to spiral into fatalism. His faith is on the one hand submissive yet on the other aggressive. In the midst of God's news about Babylonian conquest he prays, "Lord, I've heard of your deeds, I've been told of your fame, renew it in our day, in the midst of the years make it known."

Refined faith recognizes that God often does His best work in the dark. Habakkuk, instead of focussing on the seeming injustice of Israel's exile to Babylon, begins to pray for revival in the midst of it. He spends a whole chapter remembering what it was like when God redeemed and rescued Israel from exile in Egypt, and he prays for a second Exodus. He begins to spread rumors of revival in the midst of exile.

I believe the Church today should take their cue from Habakkuk. There are many rumors of Christian persecution spreading from the East to the West. Compared to Christians in the East, Middle East and in Africa, it could really only be described as pressure at this stage, not full blown persecution. But one doesn't have to be a pessimist to see a general erosion of religious freedom. Rich Nathan, former law professor at Columbus university and present Vineyard pastor has written an illuminating article on this erosion. You can read it here. richnathan.org/article/religious-freedom-under-attack/?.

However, while there are those whom God has called to stand up for religious freedom, we must remember that historically, persecution has strengthened the Church. I read an amazing exchange between James Draper of the Southern Baptist Mission's Board and one of the leaders of the Chinese House Church movement, who said to him, "Please stop praying for persecution to stop in China. It is this persecution that has brought about revival in the church in China. In fact, we are praying for the church in America, that you would experience some persecution so that you could experience revival like us."

Look, I'm not sure if my faith is there yet. I'm certainly not praying for persecution yet. But I can see what he's saying and church history bears it out. Faith in God's Sovereignty means that we can say t "What man intended for harm, God intends for good, for the saving of many lives." (Gen 50) It's not that we ignore the injustice of persecution, but we should face the fact that we as the church are effectively in exile, and begin to  focus on God's ability to revive His church in the midst of exile.

we should also remember that God is able to turn persecution around as suddenly as it came upon us. As John Stott wrote in his commentary of Acts chapter 12, "The chapter opens with James dead, Peter in prison, and Herod triumphing; it closes with Herod dead, Peter free, and the Word of God triumphing. Such is the power of God to overthrow hostile human plans and to establish His own in their place."

In the light of this then, let's be a people who face the possibility of persecution, but spread rumors of revival, confident that God is building His church and refining our faith.