Constantine, Calvin and a night in Airport Exile. 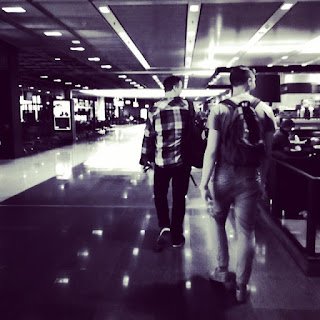 I write this from a transit room in Frankfurt airport. To call it a lounge would be too kind. Levi is sleeping next to me on a hard bench. The others have gone in search of something with more padding. Our flight was delayed until tomorrow due to technical problems. People with an EU visa were shuttled to a hotel, given restaurant vouchers and told they'd be picked up the next day. The rest of us were handed a pillow,  a blanket and a voucher to a convenience store, and told to find a place to sleep on the airport floor. If I sound a bit annoyed, I suppose I am - firstly at the frustration of being delayed and exiled in an airport, but also at the seeming injustice of it all. Apparently, Lufthansa has breached its own code of conduct.


My kids say that it's a chance to do some family bonding and I suppose they're right, but while they sleep, it's got me thinking about history. Church history. Although I'm no expert, I love Church history. It's an extraordinary gift.It can save us from over-stating the importance of our own moment, keeping us humble. It can rescue us from making the same mistake twice, making us wise. It can prevent us from being pre-occupied with the next new thing, keeping us sober. Most of all, it can yank us out of the sea of despair when a fierce squall buffets us, keeping us hopeful. Church history is a lesson in Providence, which does its brightest work on the darkest days.

Friday 26th June was a dark day for the Church in the USA. It was the day on which the Supreme Court ruled 5-4 in favor of a re-definition of marriage, legalizing gay marriage in all 50 states. For me, the day was further darkened by the very mixed response from within the Church itself, from euphoria to vitriole. Of course, we know the diverse theological fabric of the Church in the USA, but on this day, diversity seemed to be more like a gaping chasm at a time when solidarity was most needed.

There's been a massive amount already written in response to the ruling. Some have said that the day will go down historically as the "Roe vs. Wade of marriage." One of the more helpful articles I've found on the topic was by Dr. Russell Moore in the Washington Post on why-the-church-should-neither-cave-nor-panic-about-the-decision-on-gay-marriage/? Neither cave nor panic. Good advice, but how, when it seems that Christians are on the wrong side of history? How can Church history help us to respond well to this breach of a law that, until recently seemed self-evident?

Firstly, we can learn from the 1st Century, that socio-political favor did not benefit the Church in the long run. While the church was buffeted by persecution under Emperor Damacletian around 300AD, it produced a robust and cohesive company of  saints. Socio-political pressure, instead of extinguishing the Church, actually served to distinguish it. The family indeed bonded!
In 330AD,  when Emperor Constantine authorized Christianity as Rome's official religion with his resounding In Hoc Signo Vinces battle cry,  what seemed like great favor actually resulted in the beginning of a spiritual slumber for the Church as Christendom was born. It's fair to say that Constantine may have killed the Church with kindness. Christendom, while providing protection and  privilege for Christians, was never a good mother of radical Christ followers. That tended to happen in places with less Christian freedom.

Fast forward to the 16th Century and John Calvin, in favor with Geneva's Protestant government because of the ejection of the Catholic clergy, was trying to implement Biblical church discipline in the Reformed Church. The Geneva magistrates and the Libertines were having none of it. The Libertines were a political group who held positions of influence in Geneva, and they resisted Calvin's attempts to govern the church with autonomy according to Biblical principles. Calvin very quickly lost favor with those in power and influence and had to flee Geneva to take exile in Strasbourg. During his exile Calvin met Martin Bucer, the Strasbourg Reformer. Bucer's strong views on church government galvanized those of Luther's, and when he returned to Geneva 3 years later, he was all the more determined to maintain separation between state and church and to govern the church according to Biblical principles. Calvin's exile, instead of extinguishing the church, served to distinguish it from the State and from Libertine culture.

Nobody enjoys a sense of being in exile, just like nobody enjoys sleeping the night on an airport floor.  But if we are to learn from church history at all, we should learn that Jesus does do serious family bonding in His Church during seasons of exile. Let's rest assured that on our darkest days, Providence does it's brightest work. Now if only I could get some sleep.
Posted by Alan Frow at 5:55:00 PM 1 comment: