Finding Yourself in the Great Commission(s) 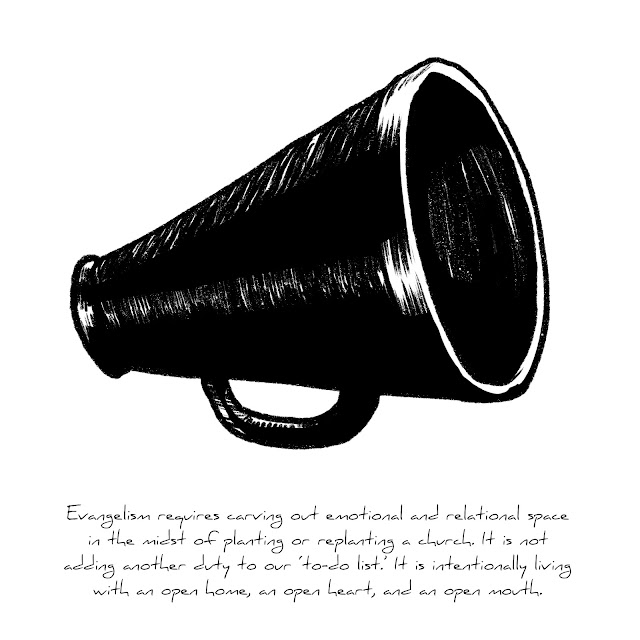 While we have seen a significant increase in the number of new believers we baptize each year at our church, if we are brutally honest, the majority of our growth does not come from the unchurched. It comes from transfer growth or from de-churched, a category of people who hold to some Christian faith but have wandered from the church because of disappointment or disillusionment. While we acknowledge the validity of welcoming people into a church that is more in line with what they had hoped church would be, we do not believe that multiplication should just be a shuffling of the deck of Christians in a given area. In Southern California, church options are seemingly endless which means that church shopping and hopping have become a way of life for many Christians. We want to acknowledge the reality of transfer growth without giving in to its lure. One way we counter the lure of transfer growth is by building strong relationships with other churches in our city. We want people to know that we are not here in competition with other churches, and that any transfer to or from our church will be handled with due honor towards other local churches and their leaders.

The primary way we counter the lure of transfer growth is by doing the work of an evangelist. Even in our increasingly post-Christian, post-modern, post-everything world, Jesus promised that the harvest would plentiful and the workers would be few. So we focus our efforts on praying for and equipping people to go and work in the harvest, which means more than planting a church and living as a Christ-follower in a given city. It means actually opening your mouth to tell people the message of the good news of Jesus.

In the Apostle Paul’s charge to Timothy, he urged him in this regard. “But you, keep your head in all situations, endure hardship, do the work of an evangelist, discharge all the duties of your ministry." (2 Tim 4:5)

One can assume that Timothy was not an evangelist, either by gifting or motivation. We know that he was timid by nature, weak by constitution and was called to assist Paul in the planting and strengthening of newer churches. While he had an apostolic mandate, he seemed to be more pastorally inclined. And yet, here was a clear call to “do the work of an evangelist.”

Finding Yourself in the Great Commissions

This charge stands as a clear call to every member and leader in a multiplying church. We all follow the example of our Good Shepherd, who not only laid his life down for His sheep but told them, “I have other sheep that are not of this fold. I must go to them.” Jesus lived to seek and to save the lost. We have all received the Great Commission from our Lord and while the Great Commission is more than just evangelism, it is certainly not less than evangelism. What fascinates me about the Great Commission is that it may actually be viewed as the Great Commissions. At the end of each of the four gospels, Jesus commissions his disciples in a slightly different manner. In Matthew’s Gospel, He says, “Go into all the world and make disciples of all nations."(28:19) In Mark’s Gospel, He says, “Go into all the world and preach the gospel to all creation.”(16:15) In Luke’s Gospel He says, “You are witnesses of these things. And behold, I am sending the promise of my Father upon you. But stay in the city until you are clothed with power from on high.”(24:48) In John’s Gospel He says, “Peace be with you. As the Father has sent me so I am sending you. Receive the Holy Spirit. If you forgive the sins of any, they are forgiven. If you withhold forgiveness from any, it is withheld.”(20-:22-23)

When we find ourselves in the Great Commissions we realize there is no one-size-fits-all in doing the work of an evangelist. We are free to find the way that best fits our wiring and personality as we share the story of Jesus. Some may be great at a slow explanation of the gospel, others skilful at punchy proclamation. Some are better at giving their testimony and telling the story creatively, while others are able to bring gospel peace into conflict situations. As leaders, we have an opportunity to help people find their place in the Great Commissions of Jesus. Which one of these commissions best fits your personality and skill set?

Doing the work of an evangelist is hard and intentional work. We can so easily be swallowed up with the duties of our ministry. Evangelism requires carving out emotional and relational space in the midst of leading or serving in a multiplying  church. It is not adding another duty to our to-do-list. It is living with an open home, open eyes and an open mouth. There is more rejoicing in heaven over one sinner that repents than over 99 righteous. So, let’s ask Jesus for power and skill to go after the one.

This is the primary way in which Jesus wants to grow churches as they multiply. Especially in small and medium-sized churches, evangelism will not be able to be outsourced to powerful professionals or big events. It will need to become a culture that lives in the leaders of the church and works its way through the whole church little by little until each and every person finds themselves in the Great Commissions of Jesus.

An excerpt from "Broken for Blessing." https://www.amazon.com/Broken-Blessing-Underrated-Medium-Sized-Multiplying/dp/1097812111/ref=tmm_pap_swatch_0?_encoding=UTF8&qid=&sr=

When the Dog Eats your Homework: a book for ordinary people in ordinary churches 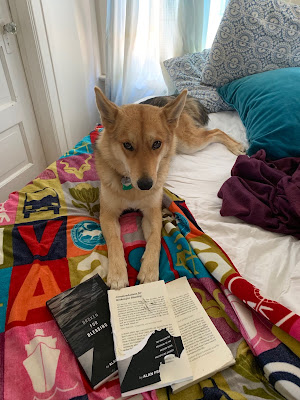 Any teacher worth their salt has heard that dubious student excuse for turning in work late. "I'm sorry, but the dog ate my homework!" Well, that really did happen to me this past week when I came home to find that Milo, our nine month-old puppy, had found a box of my newly released Broken for Blessing books and chewed at least five of them. Once I'd got over my irritation with her, I made a social media post of the books and was surprised how many people actually wanted to buy the puppy-chewed editions! That may just be their love of dogs, but I suspect it's a deeper phenomena. I suspect people want their spirituality to be rooted in the ordinary. A book on church multiplication with the cover ripped off by a puppy seems more true-to life than the glossy stories we hear at many church-planting conferences.

Among the many excellent books I've read about the church planting, there are two kinds of book that have discouraged me. The first is the kind that is insightful and inspiring, but when I look over the author's shoulder they've built little of substance, or even worse, there is personal and moral wreckage behind them. The other is the kind that has such a spectacular story of growth and impact that it inspires and disempowers at the same time. It seems like such a  glossy story detached from the dog-eared reality of mere mortals like you and me.

When I wrote a book on the underrated potential of the medium-sized multiplying church, my hope was to tell a dog-eared story that would encourage ordinary people in ordinary churches. This is why I've been so encouraged by the responses to the book that have echoed this theme. Matt Hosier, a friend, theologian and leader of a medium-sized multiplying church in the United Kingdom, had this to say along those lines.

"Broken for Blessing is not an out-of-reach account of a mega ministry by a mega pastor, but an inspiring story of what a faithful congregation can accomplish. Alan Frow does not sugar coat the costs for a medium-sized church in multiplying but does provide a roadmap from his experience with Southlands Church. Southlands might not be a church that makes headlines in the ‘most influential’ lists but she has had a remarkable journey of planting and multiplication. Broken for Blessing tells this story and is for all who desire to be part of a multiplying church."

God can do extraordinary things with ordinary people in ordinary churches

Ed Stetzer, President of LifeWay Research, estimates that only five percent of multiplying churches in the West are under 1,000 people in size.* For obvious reasons, the vision to be a multiplying church is generally a large church phenomenon because it’s such a resource-rich vision. I’m so thankful for large churches that multiply. I was once part of the leadership team at a large church that regularly invested in multiplication. I’m certainly not against large churches and I believe that this book will carry helpful lessons for them, too.

However, our fixation with large means that churches under 1,000 in size generally have a vision for addition rather than multiplication because if we’re honest, multiplication feels too much like subtraction. In the West especially, where the megachurch looms large, it is easy for small or medium-sized churches to think, “Maybe one day when I grow up and have lots of resources I’ll think of multiplying, but for now, I must grow by addition.” That’s why churches in the 5th percentile- those under 1,000 that have a multiplying vision—are uncommon, like unicorns. But for multiple reasons, I don’t think they should be. In fact, despite the resource challenges, I believe medium-sized churches are better suited to multiplying than large or small churches.

Firstly, because they are more in touch with the ordinary realities of small churches than large churches are. They haven’t forgotten the all-hands-on-deck dustiness that planting requires. They don’t expect everything to be laid out for them. Secondly, they have slightly bigger resource margins than small churches and are less likely to die through multiplying. When medium-sized churches multiply, the whole church feels the pain of sending, but not in a way that kills it. That is healthy.

Essentially, this book is calling for these unicorns to become more common. I am hoping this book catalyzes a movement of medium-sized multiplying churches, even as it encourages small and large churches in their own multiplication efforts. Don’t wait until you’re large before you start multiplying. Think of it this way: Families don’t have to be large before they multiply, they just need to be healthy. So wait until you’re healthy and get going by God’s grace. It’s how Jesus designed His Church to grow and it’s how He intended His Great Commission to be fulfilled.

Southlands is not a high-profile church and it may never be a megachurch. Our dream to be a multiplying church has meant dying to a megachurch dream, which looks like eating a slice of humble pie with a side of obscurity! But that dream has leaned that by God's grace we have multiplies 16 times in the last 21 years, mostly as a medium-sized church. My hope is that Southlands’ story can be catalytic because it is so believably ordinary.

There really is no ordinary church in Jesus’ eyes. He wants to do extraordinary things with ordinary people in ordinary churches as they place what He has given them back in His hands to be broken and multiplied for His glory.

The book is available world-wide on Amazon in paper back and kindle format.
You can order it by clicking the link below.
Broken for Blessing: the underrated potential of the medium-sized muitlipying church