To whom much is given. 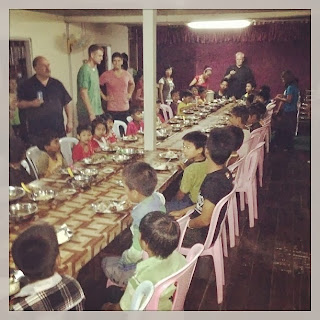 I was standing next to Kennedy, a graduate from Destiny Seminary in Yangon when I took this photo. Kennedy is now a teacher in Destiny's orphanage. He and I and the team were serving up a feast for the children in the orphanage. Pork, beef, chicken, vegetables, soda, cake and ice cream!
Their normal diet is rice and a little bit of gravy.

It was obviously deeply moving to see the excitement and gratitude amongst the children. It was like Christmas in November. I was also thankful that one of our team bought a year's supply of Unicef vitamin supplements for the Orphanage the next day. We want to help to bring sustained and sustainable change not just one night of feasting and then back to famine.

Even more moving though, was hearing Kennedy tell the story of their new-found freedom to worship Jesus and preach His Gospel. As we stood looking on at the feast, he told me of a night just two years ago when local army officials tried to force David, the principal of the seminary, to stop preaching. He asked the police to give them one more night to preach and worship. They begrudgingly allowed the meeting to continue but returned the next day to put a stop to it. The students and orphans continued like this for some time. Meeting to worship meant the risk of being arrested. Two years later the political climate has dramatically changed. They worship and preach without fear, and are making the most of every opportunity they have. There is no sense of entitlement here. Instead, there is a deep sense of gratitude and fervor to use their freedom to further the Gospel. Kennedy smiles as he sweats through an afternoon lecture on Colossians in 95F heat. He wants to plant a church. He feels that to whom much is given much is required.

These are the words Jesus said to His disciples about serving faithfully while they wait  for His return. The metaphor was of royal servants, entrusted with the royal palace, waiting up at night for their Master to return from a party. "Be dressed ready for service and keep your lamps burning."(Luke 12:35)  Jesus was calling His disciples to be watchful and useful beyond the normal call of duty. He was saying that servants of Jesus will often feel stretched, because much will be required from a King of infinite worth, whose Gospel is free but whose kingdom is costly.

Most of us would not think that Kennedy has been given much. But Kennedy is aware of  the profound riches of grace, of training and of freedom. He feels rich even though we might not call him rich. And he is willing to be stretched in order to steward these riches well.

I know it's normal for people to come back from the mission field and remind their churches that "we don't know how rich we are." Forgive me for repeating the mantra, but we don't know how rich we are! We are rich in resources, skills, people. We are rich in the knowledge of Jesus and the power of the Spirit. We don't need to feel guilty about what we have been given. We simply need to resolve not to spend it all on ourselves. We need to resolve to steward it for God and for the benefit of others. This is why we give,  go, pray and send. Because to whom much is given much is required.

Thank you for giving towards the people of Myanmar and Vietnam, for sending the team in prayer, and for staying faithful on mission at home. Let's be dressed, ready for service with our lamps burning. May the Master find us all faithful and entrust us with more.