Praying for the Persecuted Church. 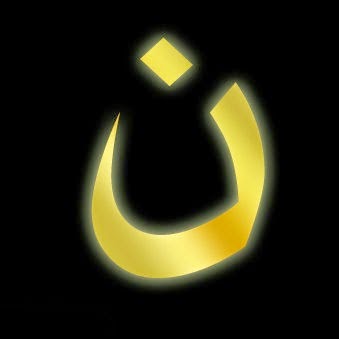 This is the symbol that ISIS has used to mark Christian houses In Iraq. Thousands of Christians have been forced to flee their homes because they bear this symbol. Many Christians around the world have displayed it as a sign of solidarity with the persecuted  Christians in Iraq. Perhaps you will too?

The Gospel has  not only reconciled us to God. It has also reconciled us to the Body of Christ, His Church around the world. When Jesus met Paul the persecutor of the Church on the road to Damascus, He asked him, "Paul, why do you persecute me?" Jesus was saying that He takes persecution to His Body very seriously and personally. After Paul's conversion he wrote, "When one member of the Body rejoices we rejoice with them, and if one member hurts we hurt with them." The writer to the Hebrews also instructs us to, "Continue to remember those who are in prison as if you were together with them and those who are mistreated as if you were yourselves were suffering."

It is with this in mind that I ask you to read this letter from Nick Saltas, one of our elders and the pastor of our Fullerton campus. We will be praying for the persecuted church tomorrow at both our Brea and Fullerton gathering tomorrow. Join us.

As many of you may be aware, the persecution of Christians in Islamic nations is intensifying, especially in Iraq. As a community of believers we are one body with our brothers and sisters around the world. Please take some focused time to pray for the situation in Iraq. Here are some specific prayer points:
Prayer

Below are some details:
• "Christian genocide…children are being beheaded, mothers are being raped and killed, and fathers are being hung."
• "Right now, three thousand Christians are in Iraq fleeing to neighboring cities,"
• "There's actually a park in Mosul where they actually beheaded children and put their heads on a stick... this is crimes against humanity. They are doing the most horrendous, the most heart-breaking crimes that you can think of."
• Christians are given three options, convert, pay a fee, or die by the sword. Arabo reports that after Christians pay the fine, the fighters take the Christian wives and children "and make them their wives - so it's really convert, or die."
• Children who have escaped to the mountains are dying of hunger and thirst
• One poor Christian is forced to say the Shahada 'there is no God but Allah and Muhammad is his Prophet' and then beheaded anyway.

(SOURCE: http://cnsnews.com/mrctv-blog/barbara-boland/leader-isis-systematically-beheading-children-christian-genocide) CNN interview video is embedded in this article

Facts about ISIS
• IS claims to have fighters from the UK, France, Germany and other European countries, as well as the US, the Arab world and the Caucasus.
•10,000 fighters in Iraq and Syria
• $2 Billion in funding
• More than a million Iraqis have been forced to flee their homes to escape the violence

All for Him
Nick