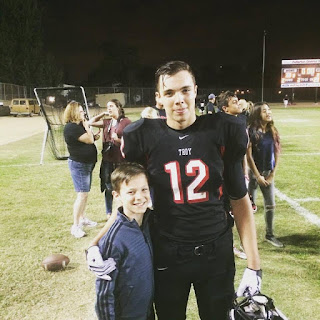 It's the Fall here in the USA, which means the kick off of a new academic year,  Friday Night Lights football and British Premiere League soccer. As a pastor, parent and fan, these are a few of my favorite things!

I love the renewed sense of focus and vision in the church as people return from summer vacation, but I also feel the tension of people's jam-packed lives as they launch into new academic rhythms and a myriad of extra-curricular activities. None more so than sport.

This week I've had 5 separate conversations with parents who are overwhelmed with the allure and demand of club, school and professional sports. One parent laments that they never eat together as a family anymore. Another is wrestling with the fact that their club schedule takes them away from church. One man has decided not to play fantasy football because he realizes it means he's glued to his TV, laptop and phone from Thursday through to Monday. Another man berates me because I'm willing to miss a quarter of my son's football game due to a pre-scheduled meeting.  How do I respond to these conversations as a pastor, parent and sports fan, myself?

Before you write me off as a sporting kill-joy, I'm blogging in between my third and fourth soccer game. My daughter plays club and my son plays signature which makes for a busy weekend, but I'm a proud and passionate supporter. So passionate, in fact,  that I was once red carded by a ref and forced to do the walk of shame to the car park for protesting a bad refereeing call in my daughter's league final! (It was an awful call, believe me) Beyond soccer, my oldest son plays Varsity football and as I've mentioned,  Friday Night Lights is one of my favorite American past times. Besides being a passionate sports parent, I played sports at a fairly high level myself, and I'm a serious sports fan. (For Soccer it's Galaxy and Arsenal, Rugby the Springboks, Cricket the Proteas and Football it's USC)  My favorite Saturday morning past time is to get up early and watch soccer and rugby games that were recorded during the night. My boys and I have been known to play  FIFA15 marathons on our PS3. My favorite thing is to surf the almost perfect long board swell on my SUP at Doheny's. Whether it's sport for exercise, competition or pleasure, I think you get the picture. I'm not anti-sports. Far from it. I have an almost insatiable appetite for it.

Which hopefully gives me some credibility when I ask whether we have ever considered what God's opinion of sport might be?  Have we ever allowed the Scriptures to probe our sport-crazed culture? This is what I intend to do this week, in three brief blogs. I want to look at sport as a gift, sport as a gamble and sport as a god.

Firstly, let's look at sport as a gift.
It's significant that while certain forms of sport were used to persecute Christians in the 1st century, the New Testament is full of sporting imagery.  The Roman Emperor Nero entertained thousands of citizens with his Gladiator competitions in the Colosseum in Rome around AD 60.  The highlight of the program was pitting Christians against lions as sport. If ever there were reason to denounce sport as anti-Christian, it was surely in the early church. And yet the writer to the Hebrews uses a sporting metaphor to describe the endurance needed in the Christian life, likening it to a marathon  runner. (Heb 12:1)  Paul too, uses a marathon metaphor to describe the focused endurance needed to follow Christ; "Run in such a way as to win a crown," as well as boxing metaphor to describe the discipline needed in a preacher; "I beat my body and make it my slave," (1 Cor 16)  His Olympic imagery not only redeems sport,  but points it out as a way of understanding the Christian life.

Besides the sheer enjoyment of sport, which is no small thing, my wife and I have often talked about the valuable life lessons that we and our kids have learned from being physically trained by sports coaches in a team environment. It's taught us discipline, how to work as a team, play hard but fair,  receive criticism,  persevere through pain and defeat, and win graciously. Although sports teams are not the only environment in which to learn these lessons,  I've found that people who never played sport often lack these qualities, and tend to be undisciplined, unable to work in team or unable to persevere through hardship. These qualities last long after fitness has been lost, or win-loss records have been forgotten. Sport is a common grace.

Paul also encouraged physical exercise in his first letter to Timothy. "Physical training is of some value but godliness is of value in all things, both in this life and the life to come."(1 Tim. 4:8) He was debunking a gnostic view of life here, which viewed the spirit world as good and the material world as evil. He affirmed the gift and stewardship of the human body as valuable, even if it was of temporary value.  He may have been talking more of health than competitive sport, but in Paul's day, exercise was generally communal and therefore had a degree of competition, not unlike the boxing gyms or cross fit boxes of today.

Beyond the clear Biblical references, sport is a gift because it's a great uniting force for people of diverse backgrounds. We witnessed the uniting power of sport first-hand in 1995 when South Africa, a country previously torn apart by racism, was united as it hosted and won the Rugby World Cup. Nelson Mandela, the president of the nation at that time, intentionally used the South African team as a metaphor for unity, calling the fractured nation to rally around their team on the day of the final. When we won, the nation was transformed. It was such a catalytic moment that Clint Eastwood made the movie Invictus to herald the uniting power of sport. We see this uniting force both in sports teams and among fans, who are able to set aside racial, economic, language and political differences for the common cause of winning.

Sport is a gift indeed.