Tribute to Darrel Ballman: A Floral to Flannel Legacy 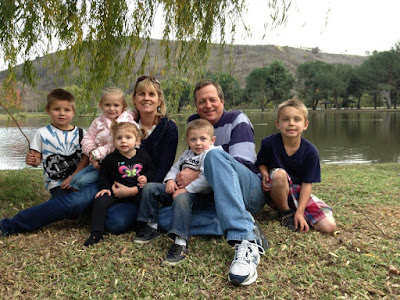 Last night we gathered at the Anaheim Vineyard to celebrate the life of Darrel Ballman. I have had the privilege of being a pastor to Darrel and Evie for the last four years, but they are a couple whose heritage is vintage Vineyard, having spent most of their marriage doing life and ministry there.

One of the things I loved most about Darrel was that he never took himself too seriously. I used to tease him a bit about the hippie-style floral shirts and relaxed approach of the Vineyard and he would agree and laugh and still keep arriving at church in those floral shirts.  He had such an endearing, self-effacing humor and was very comfortable in his own skin. It was one of the repeated themes last night from family, friends, work colleagues from the school where he taught. His mischievous sense of humor and contagious joy endured through the trial of his fight against cancer. Cancer was never in charge of Darrel's joy. That this joy is now no longer with us leaves a gaping hole in many lives.

The thing is though, that when it came to making disciples of Jesus and teaching them the ways of the Spirit, Darrel was deadly serious. I'm not sure I've ever met a couple with such a natural way of discipling young believers as Darrel and Evie. They lived with an open home and would sometimes have up to 100 flannel-wearing millennials crowded in their lounge for life group. They would often worship, pray and prophesy for hours on end spilling out into the kitchen and onto their famous deck, completely caught up in the presence of God. They were a passionate, intimate family and his unassuming persona was like a trojan horse enabling him to get the love of Jesus into the hearts of   these young disciples.

While Darrel was a powerful spiritual father in his own right, he was a man under authority. He and Evi loved the local church. I remember him asking me to come and speak to his life group a couple of years ago because some people were worried it was turing into a house church.  Before I spoke, Darrel opened up the evening before I spoke by saying, "I know that many of you see me as your pastor. But I want you to know that this man is my pastor. I am on his team." It was a masterful moment that acknowledged the role he had in his disciples lives, but placed it within the context of the local church. No independence whatsoever. Darrel was larger because of that moment, not smaller.

And so for me, Darrell's most powerful legacy could be described in Psalm 145: 4. "One generation will commend Your works to the next." That is what he did with startling effectiveness. He was passionate about his rich spiritual heritage. But because his passion was without one ounce of nostalgia or ego, he passed it on effortlessly to the next generation.

Darrel might have been comfortable in floral. But he passed the gift of faith and passion for Jesus to a generation who wore flannel. He had what might be called a floral to flannel kingdom legacy. Which means that Darrel is rejoicing in the presence of the Savior he loved and longed for while his legacy is multiplied in the hands of the next generation. And that, my friends, is reason to rejoice.