The Doheny Wave: A Parable of Church Sending and Leaving 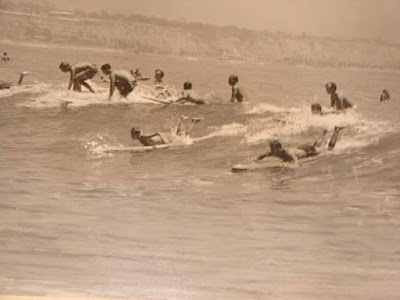 I grew up in Durban, proudly known as Surf City South Africa, but only learned to surf when I was in my late 20’s. I brought two surf boards with me to the USA, and of course, everyone told me that Huntington Beach was the spot to surf. I had no way of anticipating the territorial agro of the locals, who guarded their wave like a gang guards their turf. I remember my friend Donnie having to break up a fight between two guys in their 50’s because one guy dropped in on the other guy’s wave. This was a far cry from Durban’s chill surfing scene.

When I turned 40 my friends clubbed together and bought me a stand-up paddle board. I gradually learned to surf on it but realized it was better suited to a longer, slower wave. It took some humility to take the counsel of other stand up paddle boarders to go further south to Old Man’s(seriously!) near San Clemente, but in truth, that’s where I learned to ‘SUP,’ as they say. Later on I discovered an even better SUP wave just further North of Old Man’s called Doheny in a protected bay next door to Dana Point’s Yacht club. Doheny is a long, curling right, reef break and the hammer shaped pier separates surfers from paddle boarder’s in order to keep the peace.

Peace was the order of the day at Doheny. It was such a far cry from the cussing and clawing of Huntington Beach, it was worth the extra 15 minute drive. Doheny has these iconic photos of multiple surfers riding the same wave from the 50’s . One guy has a lady on his shoulders, the other has his dog on the board with him, the other guy is hanging ten on the front end. It’s like something out of an old Beach Boys music video. In fact, I’m told they actually shot a beach Boy’s video at Doheny once.

The thing is though, that while I prefer the communal peace vibe of the Doheny wave to the turf war of the HB wave, sometimes it can get in the way of universal surfing protocol, which goes as follows: the person closest to the inside of the wave, which if you are surfing right is the person on the left, has right of way. This is because they are closest to the pocket, which is the most powerful part of the wave. So, while it may be Doheny Protocol to have multiple surfers on a wave, the surfers should not drop in on the surfer on the inside. They need to be widely spaced enough so as not to impede the surfer who is travelling at higher velocity than they are because he or she took off from the pocket. I am neither territorial nor aggressive in the water. But I am focussed! I’ve had one too many entanglements with people who abuse the gracious Doheny wave by ignoring universal surf protocol, the last of which was a guy wearing a crash helmet while he paddled!

There is a parable here for the medium-sized multiplying church, and it has to do with church sending versus church leaving. As a church, we try to be far more Doheny than HB with people when they want to leave the church. It’s certainly one of the most painful parts of leading a church, but it’s a part you have to embrace. For various reasons, from time to time, folk feel like they have to move on. Sometimes it’s simple reasons like moving city or state for a job or because houses are cheaper elsewhere. Other times it’s more complex, like we just feel our season is coming to an end here. This normally means there is some pain or disappointment under the surface that is hard to talk about. Other times it is more blatantly conflictual, when people tell you of their disagreement with a doctrine you preach or a direction the church is going in, or a real grievance with a leader or member.

Whatever the case, one has to try and handle leaving graciously, listening and responding to people’s reasons, and realizing that Jesus is Lord of His Church, not you. People join and people leave church. I think they generally leave way too easily. But it is what it is.

Where this hurts multiplication though, is in the timing of their leaving, and this is why I use the metaphor of a wave. When you send people out to start a new plant, it is like a wave of going flows through your church. You gear up to train and send a team of valuable servant-missionaries along with some of your most vital leaders, and this is costly. You are aware that they are going to leave significant gaps in the church but you know that others will rise up to fill those gaps. That is part of the pain and beauty of sending.

But it never fails to surprise me that as you send this team out, gearing up to fill the serving/giving/leading gaps they leave, folk who felt left behind seem to feel the current of the wave too and they come and tell you that they also  feel like God is moving them on to another church. This happens every.single.time - sometimes just a week after you sent the team out to plant! At the same time as some are sent, others just went. And you have to be gracious, because well, we are the Doheny wave, not the HB wave. But the reality is, it impedes the momentum of the sending church. It’s like dropping in on a surfer taking off from the pocket. It’s not going to kill anyone, but it’s clumsy and frustrating.

On one level I understand it. People have just said good-bye to some of their closest friend and some of their favorite leaders. They feel like they are part of the left behind series. They are now having to be part of a re-building effort at the sending base and some just feel, “This is not what I signed up for. Things just don’t feel the same as they used to. I'm exercising my freedom to go too.”

And it may well be that they will go to another church and thrive. Jesus’ mission is greater than any one local church. But the fact is that it makes recovery from multiplication more painstaking.

This is why I always take time to describe the kind of church we are to newcomers who are considering becoming members. I say, “Understand that you are coming to a multiplying church, which means both warm hellos and sad good-byes. Count the cost of being a community on mission before you join. And when we send, that is ideally the time for the rest of us to stay and re-build.”

There are times when the clumsiness of the Doheny wave makes me want to be more like a Huntington Beach surfer. But then I realize that my local church is not ultimately my turf to guard. It’s Jesus’ turf to guard. And also, that there are many more waves where that came from.