Broken for Blessing: Embracing the Pain of Subtraction for the Joy of Multiplication 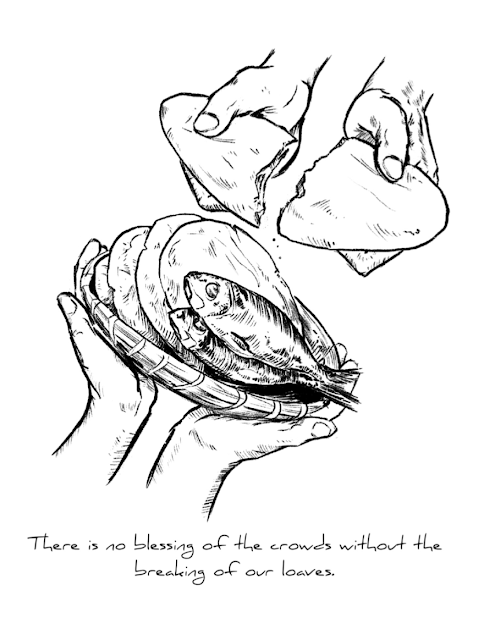 “Jesus took the loaves and fish, gave thanks for them, broke them and distributed them to the crowd.” John 6:11

When I read the story of the feeding of the 5,000, I still see it in vivid flannel graph images stuck up on a room divider in our Sunday school classroom. I can smell the salt and flour in the play dough and hear my teacher ask, “What would you say if Jesus asked for your lunch?”

Anyone who knows me knows I am great at meal bartering. As a kid, I was always looking to swap my cheese and chutney sandwiches for something better from one of my schoolmates. Not much has changed. I still try to barter when I go out to eat with my wife, because what she orders always seems better than mine. Needless to say, this miracle spoke to me back in that Sunday school class on a visceral level.

This was more than swapping a sandwich or dinner plate. In John 6, Jesus has compassion on the hun- gry crowd and asks His disciples, “‘Where are we to buy bread, so these people may eat?’ He said this to test them, for He Himself knew what He would do.”5 Andrew, one of the disciples, finds a boy with five loaves and two fish and Jesus seems to think this lunch will do the trick. So, the little boy with the five loaves and two fish is asked to hand over his whole lunch. John writes that Jesus took the loaves and fish, gave thanks for them, broke them and distributed them to the crowd. The food was multiplied so that all 5,000 men, as well as women and children, ate their fill (the whole crowd was likely closer to 20,000). What a stunning catering miracle! Jesus was a homeless man who provided a meal for a multitude with a little boy’s lunch.

But I have some questions about the story. First, was the lunch given willingly or taken? There are no details of the exchange, simply, that Jesus took the loaves as well as the fish.6 I have to give Jesus and the disciples the benefit of the doubt here because they don’t seem like playground bullies. Still, I imagine the little boy must have been a bit reluctant to part with his lunch, don’t you? Another question. Why a boy? Why someone who had no easy way of replacing the re- sources he gave up? That seems unfair. But my biggest question is, why did Jesus need all five loaves and two fish for His multiplying miracle? If He was powerful enough to multiply loaves and fish for 20,000 people, why couldn’t He just have done it out of one loaf and one fish, leaving the boy with the rest?

That’s the rub for me in this passage. For some rea- son, Jesus requires the boy to hand over his whole lunch. He seems okay to leave him, for a moment, with nothing to eat himself so that others can be fed. That moment must have felt like a lifetime on an emp- ty stomach. Jesus seems comfortable invading the boy’s margins in uncomfortable ways. This was not just a sandwich barter. This was a sandwich takeover for the sake of others. The miracle was made possible because the boy was willing for his whole lunch to be broken for the blessing of the crowd.

This is the very heart of what it is to be used by Jesus for the sake of others, isn’t it? We say, “Jesus, use me to bring Your life to others.” And He does. Yet very soon after we come back to Him saying, “Jesus, I feel used! I feel empty!” He takes all we have; blesses it, breaks it, and multiplies it to bless others. There is no bless- ing of the crowds without the breaking of our loaves. Many people want to be part of the blessing, but few want to take part in the taking and the breaking.

This is the story behind our multiplying story. It is the story of every small or medium-sized multiply- ing church. We have never felt that we’ve had enough resources to feed the crowds but we’ve wanted to be involved in Jesus’ feeding miracle. We know that ulti- mately Jesus, not our churches, is the Bread of Life. And yet we believe that planting churches is the most effective distribution system to get the Bread of Life to hungry people. So we’ve said, “Lord, we are putting our bread in Your hands, even though it’s not that much. Take it, break it and multiply it for the sake of others.” It has been stunning to see many hungry souls fed with the Bread of Life because of this.

I must warn you, though, that this is a dangerous vision. We recently walked with a Southern California church of around 100 adults who felt called to plant a church into Washington, approximately 2,000 miles away. They sent twenty of their best people includ- ing two prominent leadership couples. The send- ing church didn’t just drop to eighty. They quickly dropped to sixty adults because some who were left behind felt like the church just wasn’t the same as it once was! A year later the church had shrunk by a fur- ther twenty people and the lead pastor resigned, feel- ing distraught by the decline of a church that had felt so healthy just a year prior. Eighteen months into the new church plant it had grown steadily, seeing people coming to faith, new leaders installed and disciples being made. It has now reached around eighty adults. But the sending church, tragically, has closed.

The truth is that there can be no multiplication without subtraction, and multiplication feels like subtraction for quite some time before Jesus restores the margins of our resources. The gap between subtraction and restoration can threaten the life of a sending church. I don’t know about you, but I like resource margins. Yet multiplication means Jesus invades those margins of finances, leaders, volunteers and energy. We find ourselves feeling empty and used in the process, even
though there is joy in seeing people nourished with the Bread of Life in a new place. We feel the pain of subtraction amidst the joy of multiplication.

There is great testing of faith in the “feeding 5,000” miracle, both the disciples’ faith and that of the boy. Being a multiplying church will test your faith to its limits, too. Is Jesus able to feed the multitudes with the little we have in our hands? Will He just take what we have to bless others and leave us empty-handed indefinitely?

When Jesus requires something of us that seems un- reasonable, it is a test both of our faith and our pain threshold. C.S. Lewis wrote about this when his wife was suffering from cancer. “We are not necessarily doubting God will do the best for us; we are wonder- ing how painful the best will turn out to be.”7

John’s insight into his best friend in this miracle is stunning in verse 6. “He said this to test them, for He Himself knew what He would do.” In other words, when Jesus’ multiplying miracle tests our faith because it seems so mysterious, we must learn to give Him the benefit of the doubt. He knows what He is doing, even if we don’t understand it.

While Jesus seems to require everything the boy has, He uses it to feed the multitudes. “He Himself knew what He would do.”8 While the boy must have felt the pain of subtraction, the disciples are able to gather up twelve baskets full of leftover fragments. The crowds didn’t get just enough—after they gorged themselves on the fish and bread, there were twelve baskets of leftover fragments. The phrase leftover fragments im- plies both abundance and change. When we surrender our resources to Jesus to be broken and multiplied we can be sure He will restore them abundantly, but we are also surrendering the form in which they are restored to us. He restores fragments. Multiplication brings with it a new normal. Our lives will never be the same.

Jesus has never restored our comfortable, self-serving vision of the church to us. We are permanently ruined with a new vision of brokenness for the sake of blessing. For some people, this way of doing church is too unsettling. They have left Southlands to look for a church with a less disruptive vision. But Jesus has restored and continues to restore baskets full of fragments—finances, properties, investors, leaders, servants and friends, though not necessarily in the same form as they were given.

In summary, I want to suggest three ways of think- ing that can catalyze a movement of medium-sized multiplying churches:

A willingness to let Jesus invade our margins

Southlands began multiplying under my watch in 2012 when we had around 500 adults and 100 kids in average attendance. We sent three pastors, nine- ty adults and fifteen kids down the road to start our first multisite community. It was a shock to the sys- tem to send just under twenty percent of our church to a neighboring city; so much so that after a month I asked one of the three pastors to come back! Four years later though, by God’s grace, we’ve multiplied four times. One of those was an autonomous church plant into Thailand. The other two were multisite communities into neighboring cities. It’s been incred- ibly costly because every time we’ve multiplied we’ve had to yield our margins of leadership, people, fi- nances and ministry. And in a medium-sized church, they are margins you can ill afford. It can leave you breathless, but to see Jesus’ life in these new gospel communities is breathtakingly beautiful. We feel that we’ve been an integral part of Jesus’ multiplying miracle of the five fish and two loaves. We’ve had to put the loaves and fish we have into His hands to be bro- ken, and He’s blessed that. It’s then that subtraction begins to turn into multiplication. Isn’t it interesting that Jesus used every bit of that little boy’s lunch for His multiplication miracle? He could have left the boy with a loaf or a fish, but He used it all. Of course, it’s easier for large churches to multiply without invading their margins too much, but apparently, that’s not the only way Jesus works.

When we surrender our resources to Jesus to be broken and multiplied we can be sure He will restore them abundantly, but we are also surrendering the form in which they are restored to us.

Jesus knows what He is doing.
So what are you going to say when He asks you for your lunch?
Posted by Alan Frow at 1:26:00 PM