After an amazing weekend with Cornerstone Church in Newcastle, Rynelle and I left the team in the very capable hands of Neil and Jaclyn Thomas and Brett and Kira McCracken, as they began 4 days of exploring Christian history around the UK. We joined PJ and Ashleigh Smyth and Donnie and Jill Griggs near Izmir, Turkey, for a gathering of 60 movement leaders who are connected to the broader New Frontiers family representing 1500 churches around the world.  I'm so thankful to God for Terry Virgo, who, instead of holding on to leadership or simply handing on to one man, gave away his sphere of leadership to many leaders for a multiplied future. It was magnificent to witness this first hand.

A very colorful and high capacity crew gathered just outside Ephesus. There were leaders from Kenya, Zambia, South Africa, Mozambique, Zimbabwe, UK, Ukraine, Russia, India, Cambodia, Myanmar, Australia and the USA. Numerous movements are working to plant churches in Turkey, and being central and relatively inexpensive, this is where we gathered. In short, it's been hugely inspiring to hear and pray into what God is doing in the nations, and the equipping for mission has been absolutely world class. We're so excited to bring home some shared best practices to Southlands as we work together with Advance partner churches around the USA.

Turkey has a population of 70 million people. There are little more than 7000 Christians there at present. You do the math. It's a minute fraction of the population.  However, there is hope. Donnie and Jill spent a few days with a church planter named Andy,  who moved  to Istanbul from the UK 6 years ago. He took 2 years to learn Turkish and then planted a church. He's baptized 40 new believers in the last 4 years of his church plant and has a plan to plant 4 churches over the next few years.. His second church will be planted in an area of the city that has 1.5 million people and no churches. Not yet, anyway. I love his courage, vision and perseverance. 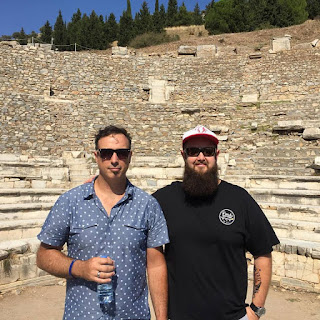 A real highlight was getting to visit the city of Ephesus, just 10 miles from where we were staying. Standing in the Lecture Hall of Tyrannous, where the Apostle Paul preached, was quite surreal. He actually stood here. This really happened. Acts 19 tells us that Paul reasoned and persuaded the Gentiles about Christ for 2 years, after which the whole province was filled with God's Word. And of course, we visited the magnificent amphitheater which seats 25 000 people,  where the riot in Ephesus began because Christians were burning their idols of the goddess Artemis. Paul ended up in a prison not far from Ephesus for preaching the gospel and challenging the religious status quo. I was freshly reminded of his words to the Church in Corinth. "I wish to spend the winter with you but I must stay in Ephesus, because an effective door of ministry has opened to me and I have many adversaries." Paul's adversaries included Jewish legalists, sorcerers, and rioters. But he didn't run.  The resurrected Christ didn't only empower him to go. He empowered him to stay. He had such courageous perseverance and it meant that the Word of God spread and prevailed.