The Best of British. 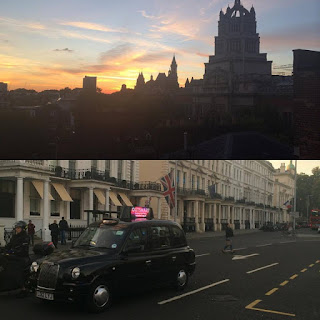 Spending a night in Gatwick Airport is not what I'd call the Best of British, but there was simply no way around it. The one redeeming component is that Jamie Oliver's Cafe' is open all night, so Rynelle and I are sitting here sipping very slowly on his home-made lemon grass ginger-beer while trying to resist his amazing looking cakes. So far so good.

I'm also trying to gather my thoughts after a whirlwind week in England. It began in Kensington at Holy Trinity Brompton, the church that started the Alpha course. Alpha is essentially an 8 week invitation to explore the claims of Christianity over dinner with permission to question, disagree and doubt. It has enjoyed massive success over the years having been attended by over 27 million people in 129 countries. It has seen a huge amount of skeptics, agnostics and atheists come to faith in Christ. We've been doing Alpha for 4 years at Southlands, so Erik and I were invited to attend a conference for leaders of early-adopting Alpha church sin the USA and Canada. We were able to share best practices and learn from the church where it all started. Alpha is an evangelistic tool that has enjoyed huge success, but it has also had the surprising effect of being a bridge builder between traditionally divided churches. There were leaders from Catholic, Anglican, Presbyterian,  Pentecostal and independent churches, all united for the common cause of the gospel. Alpha has also had the surprising effect of helping people to engage the person and work of the Holy Spirit. The highlight of my time at HTB was praying for a catholic priest called Father Simon, who was eager for the Holy Spirit to empower him to be a witness for Christ in his parish in Toronto.  I was so moved by his humility and love for Jesus. Both Erik and I left inspired by what God is doing through Alpha and motivated to see it grow in effectivenes at Southlands.

From HTB I left to meet the Southlands team flying into Heathrow. We traveled up to Cornerstone Church in Newcastle. This has been our fourth trip in four years to the church planted by Drew and Tammy Davis 13 years ago. We have walked with the church through transition, as Mike and Esole' Duff came to lead three years ago. The team of elders have done a remarkable job in transition, and it was a thrill to see how God has grown the church in so many ways. They've just moved to a new, larger venue across the street and are seeing some real traction in this influential city with its international feel.

Although the UK is a small island, with small cars, small roads and small houses, I always feel enlarged being here, because Christians get a lot done with a little. They just get on with the job, no frills and on fuss. There is a real lack of entitlement, and they seem generally undeterred by their limited resources. They talk quietly but sing loudly! They are marvelously understated, under-promising and over-delivering. The idea that the church here is dying is simply not true. It is true that Christians are in the vast minority but the  churches we've been with, are growing, seeing people saved and added and having to cram people into venues that are bursting at the seams. They generally have small margins in terms of leaders, money, time and space, but they steward what they have faithfully and courageously and God entrusts them with more.
This, my friends, is the Best of British.