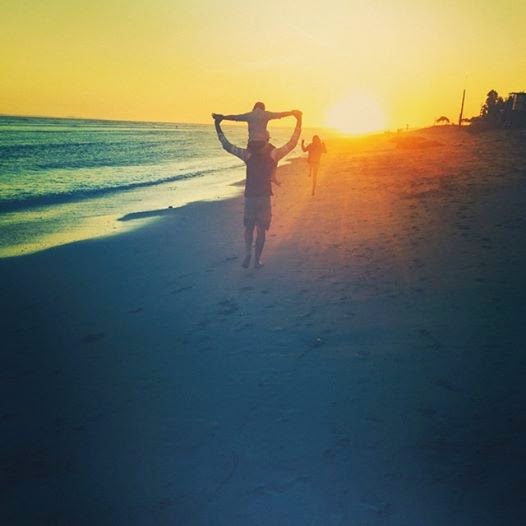 San Onofre is our vacation beach of choice. Just five minutes South of San Clemente, it's a 60's time warp with a dusty winding road, lines of classic old trucks and a perfect, peeling reef break. It's like something out of a Beach Boy's music video. In fact, it's one of the beaches named in their 1963 hit song "Surfin' USA." The thing about this place is that it makes me lose track of time. I switch off, which is a very joyful thing indeed. Rynelle and I love how happy our kids seem to be here too, and how it magically makes them forget their media. They switch off, which is even better! There are no stores, no vendors, no piers with Ruby's restaurants at the end. You can barely get a phone signal. Not to mention, Stand Up Paddle Boarders get their very own spot to surf at the famous 'Old Man's' break.

For me, it's just about as close to paradise as you get. Except for this one thing. There's this unnerving booming noise every now and then, that interrupts our beachy utopia.  It sounds like it's coming from a few miles inland, like some massive earth moving operation or something of similar unbeachyness. Is it the nuclear power station just South of us? Should we be worried? Rynelle and I are curious, and after a few days of speculating, Rynelle asks a local what the noise is.

"Oh, it's from Camp Pendleton, the Marine Base next door. They're doing Ops. Those are bombs going off. " he replies nonchalantly.  His theory is given credence by the military planes that fly overhead at regular intervals, and further confirmed by my internet research of a government article that states, "Regular regimental size artillery training explosions may be heard up to 50 miles away from Camp Pendleton."

Ignorance is bliss, as they say. And curiosity killed the cat.

Our Beach Boys video has been sabotaged by a scene from zero-dark-thirty.
Our picture perfect Surfer's Paradise has been photo-bombed with images of war.
Every resounding BOOM is a rude reminder of the fact that just a few miles from our *s'mores fire, there are people training for war. And nobody on the beach seems to bat an eyelid.

Of course there's a part of me that feels thankful for people willing to risk their lives to protect our shores, but I have to admit, another part of me feels a bit resentful that they have to do it in such close proximity to our vacation spot.

But it's too late now. I'm starkly reminded that our world is at war.
The recent redeployment of US troops into Baghdad to help fight Sunni armed forces bears that out.  So does the fresh resurgence of the Israeli/Arab conflict in Gaza.
The news headlines of Iraqi Christians forced to flee their homes just this week under persecution from ISIS also underlines this fact.

Now I feel guilty for resting amidst these global struggles.
What business do I have teaching my son to surf while these battles rage on?
My mind takes up its weary wrestle again with the ethics of war and peace, and my soul is burdened by the erosion of religious freedom and the resurgence of Christian persecution.
I am now in an internal war. My vacation peace has been ambushed.
Perhaps Ruby's at Huntington Pier would have been more tranquil after all?

The more I've reflected though, this bizarre bombs and s'mores scene might not be such an inappropriate metaphor after all. Perhaps it's a helpful reminder that God's peace is not the complete absence of conflict, but a state of calm in conflicts' presence?

It's also a reminder that rest does not mean complete passivity.
We're called to be watchful even while we're restful.
As believers, we're in a spiritual war that pays no respect to our need for rest.
Our enemy the devil prowls around seeking for those he can devour.
When physical rest leads to spiritual slumber the results can be disastrous.
I think of King David who lusted and plotted while he rested.
He was morally sabotaged while on vacation.

And then I think of Gideon, whose troops went to refresh themselves at a stream after a battle.
The Lord told Gideon to choose only those soldiers who cupped water into their hands, lapping with tongues like dogs. Those who knelt and drank straight from the river were left behind.
This is the posture we are called to take as we refresh ourselves, drinking with our heads up,
ever watchful for the ambush of temptation, and for the chance to advance God's mission.
Restful but watchful.
Pass me another s'mores, please.


*s'mores - the American word for marshmallows roasted over an open fire sandwiched between two graham crackers with Hersheys chocolate.