Preaching through the Greatest Letter Ever Written 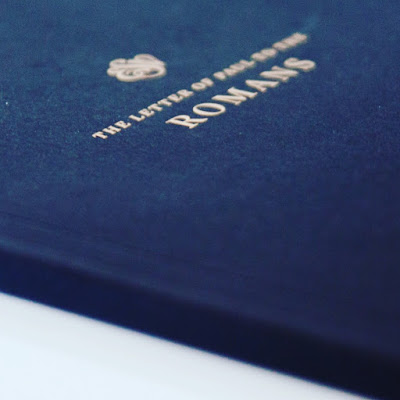 I've wanted to preach through Paul's Letter to the Romans for about ten years now, but I've always drawn back when it comes to taking the plunge. Until now, that is. Southlands begins its Romans series this coming Sunday and I couldn't be more excited about it.   But it's taken us this long to get to this point because it's an intimidating letter. For a start, it's sixteen chapters long. Dr. Martin Lloyd Jones preached through Romans for thirteen years and only got to chapter fourteen before he died! Rest assured, we're not going to do that, but still, you get the idea. It's not a brief letter because it's such a deep letter. Whenever I've considered preaching it, I've wondered how you do justice to what Samuel Coleridge, the English poet referred to as, "The profoundest piece of writing in existence?"

To add to the intimidation factor, while a number of famous preachers have taught through Romans, I don't personally know any pastor who has attempted it. Whenever I've asked my friends they've responded with comments like, "No way. Too long. Too controversial. Too complex." This has added to my perception that it is not a quest for mere mortals.  How do you preach the depths and heights of Romans in a way that doesn't let feel like we're climbing Mount Everest?  Can our church cope with a longer series? Is it worth the risk?

I believe it is, mainly because of Roman's incredible beauty. No letter in Scripture puts the beauty of the gospel on display quite like Romans. To me, it's like a diamond that gives the reader a glimpse of the multifaceted gospel in all its brilliance.  Martin Luther called it the purest gospel and insisted that, "It can never be read or considered too much or too well, and the more it is handled, the more delightful it becomes, and the better it tastes." Every one of us need a clearer vision of the immeasurable riches we've received through Christ if we are to live our lives for the sake of the gospel. So, we're going to mine Romans for all it's worth this Fall and take some breaks along the way to avoid getting in over our heads. Only God knows, but we'll aim to complete it by the end of next summer.

There are three other reasons why I believe Romans is worth the risk.

It's Double-Impact. It's both theological and practical. It helps us to tackle great theological mysteries like the nature of sin, the Sovereignty of God and the outworking of our salvation. It also speaks with practical wisdom into relationships within the church, the family and the workplace, how people change, how we are to live in the world without being of it. It's also double impact in the sense that it's both edifying and evangelistic. It's written in such a way that it communicates the gospel both to those who are saved and to those who are seekers.

It's Spirit-Orientated. For those that think Romans is just a book of theological concepts, you are mistaken. It describes the believers' life in relation to the Holy Spirit in most profound ways. In fact, it unpacks Southlands' desire to be a Gospel-centered, Spirit-empowered people more comprehensively than any other epistle.

It's Revival-Infused. Frederic Godet, the Swiss theologian, said, "Every movement of revival in the history of the Christian church has been connected to the teachings set forth in Romans... and it is probably that every great spiritual renovation in the church will always be linked, both in cause and effect, to a deeper knowledge of this book."

More than 500 years ago, Martin Luther was saved as he read the third chapter of Romans and this sparked the Reformation. Almost 200 years later, John Wesley heard Luther's commentary on Romans chapter 3 being read aloud and felt his heart strangley warmed and felt an assurance that his sins were forgiven. This sparked the Wesleyan revival.

More than anything, I pray that as we journey through Romans, God will bring a wave of repentance and revival to us that will splash and ripple out from us in a way that transforms lives, families, neighborhoods and nations for years to come.

One way that you can begin to prepare your heart and mind for it is to listen to this amazing spoken performance of Romans by my friend, Andrew Wilson. It will begin to bring it to life.
Andrew Wilson performs Romans
See you Sunday.