Resounding Anthem : How God is Amplifying the Voice of the Church in Asia and whether we're Listening.

What can one really hope to say of the Church in a Continent so vast and diverse after a mere sixteen day trip to India, Nepal and Thailand? I don't presume to offer anything more than an impression. Mind you, it's an impression that has deepened with each visit I've made to this region these last twenty years. It's this. The Church in the East may have more to teach us than learn from us.

Not to mistake this impression for Christians in Asia being unteachable. Nothing could be further from the truth. I've seldom seen such hunger to learn from God's Word as I did on this trip, always taught through a translator, sometimes in three languages, seldom for less than four, one-hour sessions a day. Not to mention a couple hours of worship and prayer.   I guess there's something about traveling 3 days by bus to attend a conference that feeds hunger like that.

Though each nation is unique, Christians in all three regions experience significant forms of hostility because of the gospel. In two of the three, that hostility could be described as persecution.

But the quality of their faith reminded me of Paul's description of the Thessalonian church. "For you received the Word in much affliction, with the joy of the Holy Spirit, so that you became an example to all the believers...for not only has the word of the Lord sounded forth from you in Macedonia and Achaia, your faith in God has gone forth everywhere."  (1 Thessalonians 1:6)

Like the Thessalonians, the word of the Lord is sounding forth from the Church in Asia as an example to us, not of perfection, but of radical authenticity. We dare not ignore the sound of it.

So what does their resounding anthem teach us?

To lean into long-suffering I'd just preached two sessions and went to a bathroom  that had a very low doorframe. I bashed my head on a rusty latch on the doorframe and had to go off to hospital for a tetnus injection and to have my head wound cleaned up. It wasn't very deep, but I was feeling pretty sorry for myself on my return to the meeting where a man called Ude was reporting back. He told us that he'd planted ten churches and had been beaten for preaching the gospel in every new region he had been to. "But the Word of God never seems to spread until I get beaten," he explained, "And so, I am willing to keep getting beaten if it means that the gospel continues to spread."

Suddenly my little head wound seemed inconsequential. On a masala chai tea break after the session, my friend Chad and I were pensive. "Are we even playing the same game?" Chad ventured. "Back in Arkansas I'm trying to get the coolest design for my next sermon series in the hopes that people will show up to church instead of watching football and this guy is getting beaten for proclaiming the gospel!" I had no real answer to explain the yawning gap in reality that we both felt. Make no mistake, Chad is experiencing some real challenges in his church in Arkansas. But most of his are associated with comfort-loving cultural Christianity, the problem of a majority faith that has been assumed and ultimately denied because of its popularity in the USA. We need to learn greater long-suffering from the Church in Asia.

To love our enemies. I sat on the edge of my seat as my friend Raman taught those who were experiencing persecution on how to respond. This was a lesson that none of us from the USA, Australia or South Africa could teach with any real experience. With fatherly wisdom, he explained, “We engage those who persecute us with love because the spirits behind them have no defense against the weapons of love." I had never heard such practical teaching on how to face persecution well. I wondered what these Indian and Nepali believers would think about our tendency to cry foul at the slightest opposition. Still, even if we do not face persecution per se, we all face some level of hostility because of the gospel, and the principle applies. We do not wrestle against flesh and blood but against spiritual powers. We are to engage those who oppose us with the irresistible weapons of love not war. One addendum to this. When you have a real human enemy you are less likely to think that a Christian brother or sister with whom you disagree, is an enemy.  Those of us who enjoy freedom can easily squander that freedom by mistaking brothers and sisters in the Church with whom we disagree for enemies.

To turn to God from idols. Our Southlands team witnessed a woman from Yafu village in Thailand getting baptized as a follower of Christ. This is always amazing, but the context makes it even more remarkable. Just three years ago two missionaries were martyred for trying to evangelize  her previously unreached village. This lady is only the 20th person in Yafu to be baptized as a Christian! The gospel is taking root and bearing fruit in Yafu village!  But before baptizing her, the team helped her to demolish her idols to the spirits she had previously worshipped. She turned to God from idols. She did not add God to her idols. I wish it were that cut and dried in the West. Our idols are far more subtle. More respectable. More material, but no less spiritual in essence. They still break our hearts when we worship them. I think we can learn about turning to God from our idols when we recognize what they are. What competes with Jesus for my allegiance and confidence? That is my idol. Let's be a people who recognize and repent of our idols, as surely as if they were a statue to a foreign god.

If we could learn to sing their anthem in these ways, the Church in the West would be far stronger and richer for it. God has chosen the poor in this world to be rich in faith. Of course, we still have much to teach and give to the Church in Asia. They need our support and solidarity in many ways.  But let's give upwards, not downwards, as humble  learners, not just teachers.

I was not able to post many photos because social media in some regions can result in greater persecution, but I did happen to post one photo of a Punjabi man who fell asleep on my shoulder while I traveled on a bus. At the end of our time in India, one church leader mentioned that photo saying, "That's how I feel with you guys. We can relax around you and rely on you." 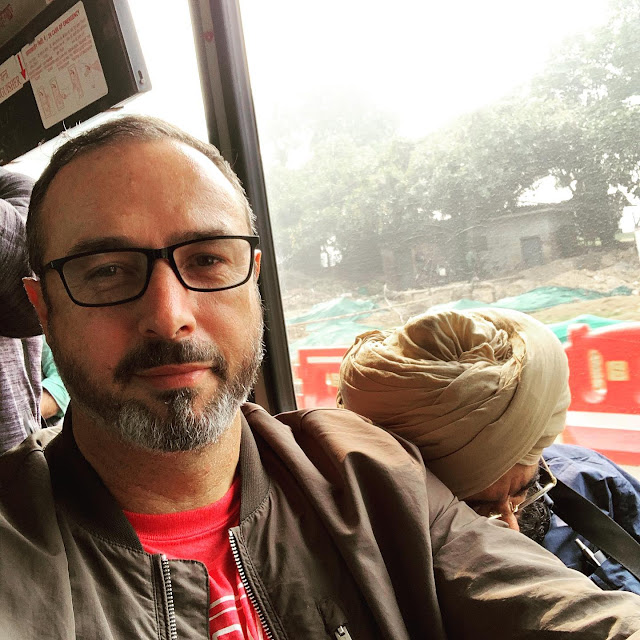 Maybe that's the best posture we can hope to take; to aim to be a shoulder to lean on even as we learn from the resounding anthem of the  Church in Asia.

"Are all Complementarians Jerks?": Reflections on a Conversation with Mike Erre after the John Macarthur/Beth Moore fiasco

I'm a little late to the party, I know. The fire storm caused by John Macarthur's recent comments about Beth Moore, has started to die down. If you haven't listened to them, here is a clip. Go Home Beth Moore No doubt, we've already found the next fiasco to stir up a frenzy of indignation, but the issue of women in ministry is still red-hot in our cultural moment. It's not going to go away any time soon. Because of this, I was willing to accept an invitation from my friend Mike Erre, an extremely gifted Bible teacher who hosts the popular Vox podcast and who also happens to be an Egalitarian, to weigh in on Macarthur's recent comments and women in ministry in general. It's quite long, but I think worth the listen. Vox Podcast: Alan Frow on Women in Ministry

To be honest, the response to our discussion took me by surprise. In a good way. While Mike and I may differ in our views on men and women in the family and the church, our discourse felt warm-hearted and fair-minded. That seemed to encourage listeners who reached out to me from both sides of the aisle to say that they appreciated the tone of the conversation. In this age of outrage in which we tend to villainize those we disagree with, that alone seemed worthwhile.  Moreover, some Egalitarians contacted me to tell me that they found some of my points helpful and even convincing. They didn't realize that there was another kind of Complementarian than MacArthur's version.

What I realized was that men like Macarthur have created a caricature of all Complementarians as insecure and arrogant. A few minutes in to the interview, Mike literally asked, "So you grew up Egalitarian and now you are Complementarian. How is that? Because you don't sound like a jerk!" It seemed incredulous to Mike that someone might be a Complementarian and not be a jerk.

There is now such a stigma associated with the idea that men and women are equal in value and dignity but not interchangeable in role, that it is viewed by many as religiously-veneered sexism. Admittedly, men like MacArthur, with their high-school-locker-room-smugness, add fuel to the fire of this perception. And yet, there is an unmistakable theme of complementarity rather than sameness between men and women in the Scriptures. The differences between men and women in the family and the church are not viewed as a power play in the Scriptures, but rather as a necessary and beautiful mystery, reflecting the image of the Tri-Une God, complementing one another in united diversity.  Better together.

I fear that the rise of Egalitarianism in the Church in  our day; the idea that equal value and dignity between men and women must mean equality of role - may partially arise from a fear of rejection by our pervading culture. Today, Christian sexual ethics and complementarity are two of the primary Biblical teachings that make us feel like exiles - a peculiar people, out-of-step with our culture. But we ignore the timeless call for men and women to be diverse image bearers of God, at our peril. The attempt to blur gender difference removes the beauty that God displays by the combining of binary opposites in creation; night and day, heavens and earth, sea and  land, male and female.

I have written quite extensively on the ways in which we have tried to arrive at a more spacious Complementarity here. and here..  I believe some of the historic boundaries we have put in place have been narrower than what Jesus would have wanted. If we look at his liberation and protection of women, as well as the ways in which He engaged women and received ministry from them, we Complementarians must allow His life to mess with some aspects of our human tradition. And yet, Jesus, the great women's liberator and breaker of social convention, still chose twelve men as his Apostles. Egalitarians must allow this to mess with their deconstruction of Biblical tradition.