Winning Home and Away Games as a Church: Hard Lessons from the Colonel 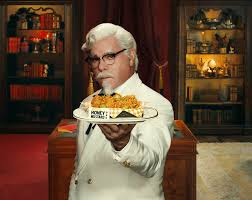 I recently saw a twitter thread about KFC. A friend who travels a lot on business noted that KFC tasted better in China. The options and the quality were apparently on a whole new level to what he experienced in America. Another guy who had visited the UK chimed in saying KFC in Britain was also so much better than in the USA. I felt bad for KFC, but I had to concur. I had a fantastic KFC burger in Bangkok airport recently with a Thai take on the sides. Also, KFC in South Africa is absolutely delicious. So delicious in fact, that in 2017, when we first broke the news to our children that we were  moving to America, we we did it in a KFC!  To us at least, KFC was so quintessentially American and we considered it a real treat.(don't laugh!)  In fact,  when Rynelle and I first got married and were both still studying and working part-time, our monthly treat was, wait for it...KFC. Nothing like  finger lickin' good chicken for a date night. Come to find that when we arrived here,  KFC in its home country was somewhat underwhelming. None of our new American friends wanted to go with us to get the golden deliciousness when we suggested it. (I know, it's not the healthiest) But they told us that the stores were grimy and that the the chicken lacked quality, even though it was cheap, and that, well,  El Pollo Loco was better.

Don't get me wrong, I think it's remarkable that this great company has become an international brand,  able to innovate by contextualizing in each culture while remaining true to it's signature fried chicken.  I still enjoy it occasionally at home too. When I break a fast, I always do it with a bucket of KFC, still craving the Colonel's eleven herbs and spices from time to time! But I think the KFC story carries a warning for us. No franchise will succeed in the long term if it wins away but loses at home. Same goes for a sports team. Come to think of it, same goes for a church.

This has been something of a mantra for me as a leader at Southlands the past decade. We must be a team that wins both home games and away games. We want to be sure we are pastorally, missionally and financially healthy so that we know we are exporting something that's working at home. Ask me what I'm most excited about? It's what God is doing at Southlands Brea; the baptisms, the traction on high school and university campuses, the growing momentum in our children and youth ministries, the mercy initiatives, the flickering fires of promised revival. But we are a multiplying church with a connection to a global family of churches. God has called us into a multiplying story, which means we are sending teams to plant and strengthen other churches more than the average church. Having a strong away game has been part of our DNA for decades now, and by God's grace we will continue to "Go into all the world and make disciples of all nations."

For me personally, this means balancing my time between pastoring at Brea, providing oversight to our other Southlands congregation leaders, being involved with our Manna churches, as well as playing a leadership role in our growing Advance family of churches. As you will know, this takes me away from Brea for a certain amount of days a year.

How does this work, you ask?

The short answer is, "The grace of God and team." Because of the call of God upon us and me to be fruitful both home and away, there is a corresponding grace that has enabled us to keep taking ground on both fronts. Part of that grace has been building a strong and gifted team who continue to lead the church forward when I am away. They are not holding the fort. They are advancing the mission. The team also speaks freely into my travel schedule, helping me to discern what to say 'yes' and 'no' to, so that I am not away to the detriment of my family, my health and our church. (For instance, just this week, I  said no to three invitations. because my 2020 travel planner is maxed out)

I also love to send teams out without me to help strengthen churches. This is happening more and more.  I have tried to say yes to more mid-week invitations than weekend ones. I am out 8 weekends  in total this year. This has been a fairly standard number over the years.  For those of you who care to know about my travel and other ministry that is hosted at Southlands, I have included them below. Please pray for Rynelle and I as we travel and pray for Southlands, that through God's grace and wisdom, we would continue to win at home and away as a church. Thank you for your grace extended to us as you carry the cost of this call with us. Our worlds are all larger because we have aligned our lives to our true and better Colonel and His Great Commission.