March Madness and the Mission of God 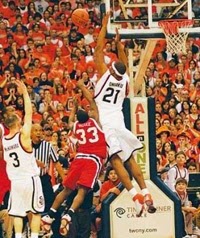 March Madness, for those unfamiliar with basketball, is the term used to describe that period of time when the US College basketball season crescendos to a frenetic conclusion. There are so many games to watch, with such excitement, that fans are known to be glued to their tv's/tablet/smartphones, literally missing in action from normal life for the best part of March.

As a pastor here in Southern California, I've come to experience another form of March Madness. It has less to do with basketball than it has to do with a month affected by 5 phenomena. They are:
1. Rain (we get so little of it, that when it happens people stay in doors. Southern Californians are scared of rain!)
2. Snow (when it rains on the plains it snows in the mountains and the slopes call. For the record I love skiing!)
3. Flu (understandably, it tends to wipe out whole families. Ask us!)
4. Spring forward (who knew that a one hour time change could affect so many?)
5.  Public holidays (Spring break and Presidents Day mean people are enjoying our Golden State)

Of course, the rhythms of our culture are to be enjoyed and celebrated. However, as the people of God, living in the world but not of the world, we are called to discern when the rhythms of our culture are at odds with the Mission of God. What does it mean to guard against a seasonal scattering amongst the people of God and a loss of focus on the Mission of God?

There is a difference between sending and scattering. I'm so encouraged by the sending taking place in the church. We sent a team to serve in Los Angelicas Orphanage this weekend in Mexico. They did such great work. We sent a bunch of people away on the Alpha weekend too. It was delightful to hear of people crossing the line of faith, getting healed and encountering Jesus. There have been a record number of signups for our missions trips this year, as we travel to other nations to serve churches and orphanages and schools. I'm so thankful for so many who serve tirelessly in these God adventures.

On a similar sending note, this Wednesday Rynelle and I head to South Africa for 2 weeks of ministry. We haven't been back in 4 years, so we look forward to reconnecting with family and friends, and ministering into churches we've grown to love deeply over decades.

The first weekend we will be with LRC Church in Johannesburg, the church that we led from 2002, before handing it over to Ed and Heidi Strong in 2007. We'll speak at their Leadership Summit and minister at their Sunday gatherings. We so look forward to reconnecting with old friends and making new ones at LRC. The next weekend we'll be with Nick and Katie Hardy who lead Red Point Church in Durban, a church of similar age and size to Southlands.  I'm sure we'll learn as much as we teach at both of these remarkable churches. Pray that we'd be a help and an encouragement to them, please.

Over time we've developed gospel partnerships with other churches in the USA, and we're traveling with leaders from 5 of these churches to attend a conference for leaders with Advance, a movement of churches led by our friend PJ Smythe. I'll be speaking and leading worship at the conference, but primarily we are there to explore what it looks like to partner with churches for the  advance of the Gospel in the USA and beyond. We covet your prayers, for wisdom for the way forward.

All of these sending moments are like a team going on the road to try and win an away game. One of the values we've tried to preach and live out as a church is to give ourselves to winning both home and away games. The Mission of God has called us to make disciples all the way from our home town to the ends of the earth. But a team that only wins away games, never really gets very far as a team. I don't believe God has called us to choose one or the other.

So, during March, let's avoid the Madness! Let's take heed of the warning in Hebrews 10:25, "Let us not give up meeting together, as some are in the habit of doing, but let us encourage one another - and all the more as you see the day approaching.'

Jesus is absolutely committed to building His Church, and neither the gates of hell, nor March Madness, will prevail against it!
Together, for Him,
Alan
Posted by Alan Frow at 12:48:00 PM