Our New, Dual and True Citizenship. 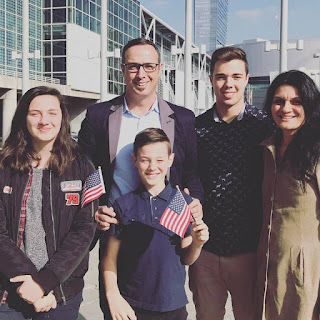 After 9 years of living in California, I pledged allegiance to the flag of the United States of America. I sang the Star-Spangled Banner with tears in my eyes and a lump in my throat and felt the honor of calling the Land of the Free and the Home of the Brave, our home. We did not come here to pursue the American dream. We came here for the fame of Jesus' Name and the building of His Church. But we have been welcomed and profoundly blessed by America's largeness of heart and horizon on the way. We've also been stretched beyond imagination by her intensity. It's true. You do have to be brave to call America home. It can be gut-wrenching one moment, breath-taking the next. America is a miracle. Political partisanship and racial tension run like a poison river through the canyon of her soul, alongside the golden vein of inspiration, bravery and philanthropy. With all her complexity, America is home, and today we count it a longing fulfilled to be called fellow Americans.

Of course, pledging allegiance to a new nation means giving up allegiance to another. We've not done this lightly. It has been a 26 year journey of gradual leaving and cleaving, beginning with a defining God-encounter in Muir Woods, California when I was just 17. South Africa, the land of our birth is etched so deeply on our souls. Our family is still there, along with so many dear friends. We still carry her fiercely hopeful gees* and her unrelenting ubuntu*. For South African friends and family who have struggled with our decision to pledge allegiance to America, we've tried to explain it through the example of Jesus who became flesh and dwelt among a people, took on a nationality, learned a language and embraced a culture. The best missionaries burned their boats and called their new land home. We have given up allegiance to South Africa, but we have not given up hope for her. On the contrary, we still hope for what Alan Payton envisioned all those years ago in Cry the Beloved Country, that she would be "a great and peaceful land in which the world would take pride, a nation in which each of many different groups will be making its own creative contribution." She too has her own miraculous story. In light of that, we've thought it wise to maintain dual-citizenship to enable us to visit regularly and maintain meaningful connection with South Africa our dear land.  So we will hold on to our green passports with gratitude and pride.

All this talk about citizenship has had me thinking about the idea that every Christian holds dual-citizenship. We are all ultimately Citizens of Heaven living as ambassadors on earth, pledging first allegiance to Christ our King. The Church is an embassy of heaven living for the peace and prosperity of the nation in which it dwells, longing for a glimpse of its heavenly country to appear in its earthly one.  While honor towards human government is the order of the day, our allegiance to Jesus' government  will at times bring us into conflict with the powers that be as we live for His Kingdom to come on earth as it is in heaven. The Hebrews 11 heroes of faith all acknowledged that they were "strangers and exiles on earth, desiring a better country, that is, a heavenly one. Therefore God is not ashamed to be their God, for He has prepared for them a city."

In the midst of our earthly citizenship, may a new patriotism for heaven grip our souls.