A Night of Grace: Two legends re-unite for the benefit of others. 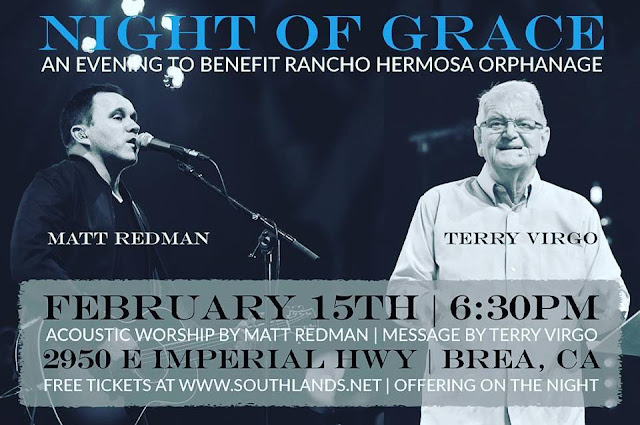 I couldn't honestly be sure if it was the Spirit's prompting or just nostalgia. Sometimes it's hard to tell the difference between the two! But last, year I kept on thinking about a night of grace 15 years ago that left an indelible imprint on my soul.

It was 2002 and I was a pastor at New Covenant Church Bryanston, in Johannesburg, South Africa. I'd traveled as a band member with Matt Redman around South Africa on a previous tour, so was looking forward to reconnecting with the prolific British worship leader whose songs were becoming worship standards in churches around the world. I'd heard of Terry Virgo, the elder-statesman and founder of New Frontiers, but had never met him, so I was intrigued by the idea of their 'Amazing Grace Tour,'  because I'd never seen a worship leader and preacher tour together with such intention.

The night turned out to be unforgettable. To a packed house, Matt led worship and Terry preached around the theme of 'Amazing Grace.' I remember being offended one moment, liberated another moment, brought to tears the next, by the scandalous gift of grace that Terry preached from Galatians. I'd not heard it preached with such purity before, but it was the spark that began a fiery awakening to the gospel of God's grace in me. Matt's songs were powerful amplifiers of what was preached. The only response to theology on fire is doxology as John Stott once said.  It was a night of conviction, of liberation and celebration. Biblical Nitro met Holy Spirit Gylcerine in an explosion of gospel joy! It was basically Church as it should be!

So, knowing that these two humble legends of the faith would be in Southern California around the same time in February, I took my courage in my hand and asked them consider re-uniting one more time for a Night of Grace. This wouldn't just  be getting the band back together for old-times sake though. I envisaged this gathering would be both a celebration and extension of the amazing grace we've received to others who are in a place of need. This would be specifically about extending grace in the area of orphan care, which is so close to God's heart and to our heart as a church.

This will take the form of a short video and offering taken up  for the benefit of  the Rancho Hermosa Orphanage in Baja, Mexico. Southlands has been working with One Generation for the past few years to build the orphanage and get it up to meeting government standards. We are just a few months from it's official opening and we wanted to extend the grace that we have received to others in need through this offering. Matt and Terry and Southlands are willing to absorb the cost of the evening in order to pass on the proceeds to Rancho Hermosa.

So, join us on the 15th of February as we celebrate and extend the amazing grace of God in Christ.  Tickets, although free, do need to be registered for at www.southlands.net.
But hurry, because space is limited. Look forward to seeing you there.